Here are 5 out-of-the-box things you can do with our delicious boxed soups. Believe us, you’re going to want to try these...

Right Foods
Back to articles

Soup. This magical mixture that’s known for being reliable, comforting and delicious all at the same time. But exciting? Sometimes not very. Here at Right Foods, we’re on a mission to make vegan soup interesting, and we believe that soup can (and should) be eaten in more than just one way.

That’s right, people! We’re all about mixing it up.

Today, we’re exploring five things that you can do with our vegan tortilla soup- from a spicy version to a crunchy taquito twist. If you’re also a fan of tortilla soups, you’re not going to want to miss these flavorful recipes.

The number one thing we love doing with our ready-to-serve tortilla soup is… scarf it down as soon as humanly possible.

First up on this list is a simple, spicy tortilla soup recipe. We jazzed-up our already-fabulous soup with some fresh chili peppers, vegan sour cream and some sliced avocado for this easy and absolutely delicious bowl of pure comfort food.

Loaded up with all of the good stuff, you’ll be able to say “soup’s on!” in a snap.

“I always love recommending these soups by @rightfoods to those needing plant-based food that is convenient and uncomplicated.”

This vegan taquito recipe is pretty spectacular, if we do say so ourselves. The crunch, the flavor, the vegan-ness of it all. Honestly, even some of our non-vegan friends devour these by the plateful. If you’re craving a good soup but are looking to spice things up a bit, these taquitos will do just that.

This recipe from @plantfullybased is a more attractive option than the fried taquitos you can buy in a bag from the freezer section. But these tortilla soup taquitos will still give you that crispy, mouth-watering sensation that you’re looking for. If you’re interested in a non-traditional way of preparing your vegan tortilla soup, let us suggest these heavenly taquitos

The ultimate weeknight snack or weekend treat, you can make vegan tortilla soup nachos in under 10 minutes and with as many or as few ingredients as you’d like! If you keep some simple pantry staples on hand (like a few boxes of Right Foods Vegan Tortilla Soup), you can enjoy a plate of hot, vegan nachos whenever the craving strikes.

For the base of your vegan nachos, start with lining a plate or tray with a bag of tortilla chips. If you’re feeling extra adventurous, try your hand at making your own!

Next, heat up your tortilla soup according to the directions on the box. When that’s ready, pour the soup (carefully!) over the pile of chips, and finish it all off with your favorite vegan toppings.

This one is pretty self explanatory, but just because it’s simple doesn’t mean it tastes like it.

Make your tortilla soup per the instructions on the box, and while that’s heating up prepare your rice. You can go for brown rice or white rice, whatever you prefer. When those are both finished, divide the rice into two bowls and divide the hot soup evenly over them. Top it off with crunched-up tortilla chips, some shredded vegan cheese, avocado slices and maybe even a squeeze of fresh lime juice- in the traditional tortilla soup fashion, of course.

Word to the wise: Your kids are going to love this, your roommates are going to plead for some, and if you live alone, you’re going to want to make extra for lunch the next day.

Sure, you’ve had tortilla soup before- but have you ever had it in dip form? Oooooo you’re in for a serious treat.

We’re here to tell you, it’s something else.

Serve this with fresh tortilla chips, potato chips, or whatever chips you’d like to scoop up your warm, gooey tortilla dip with!

“This soup is amazing! I discovered it at Whole Foods and liked the list of ingredients… short and included only real food items. The taste is just what you’d want in a soup… I may donate my soup kettle… why make homemade soup now???”

If you’ve tried any of these tortilla soup recipes, tell us how they went below! 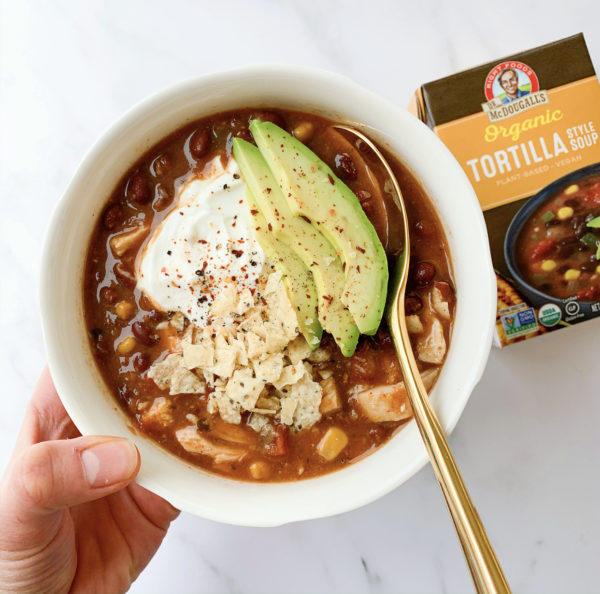 Submit a Comment on 5 Things to Do With Tortilla Soup